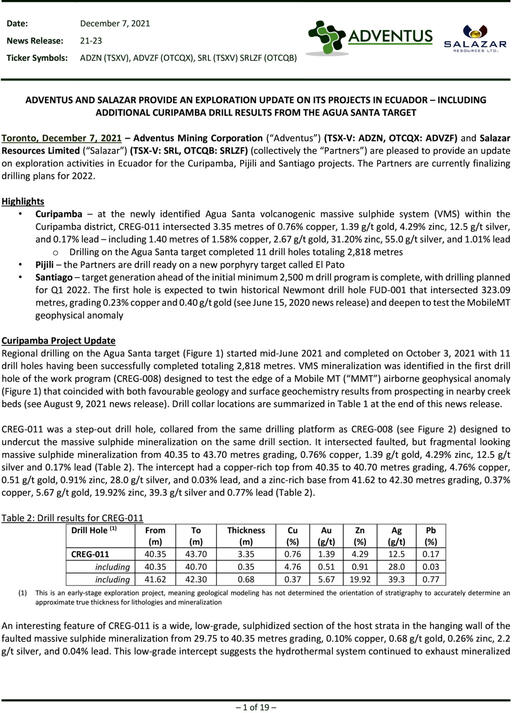 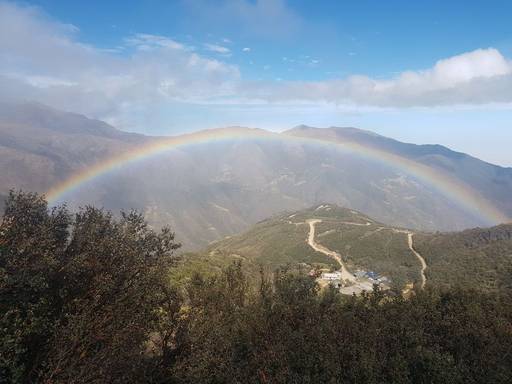 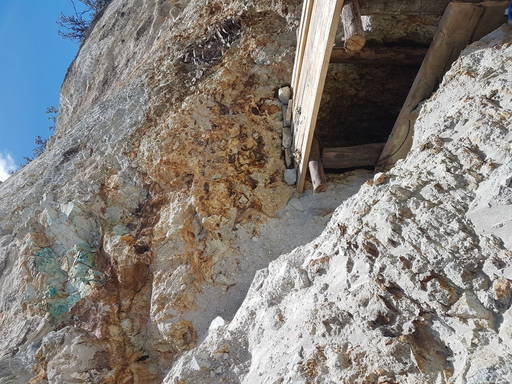 Artisanal mine mineralization at Pijili 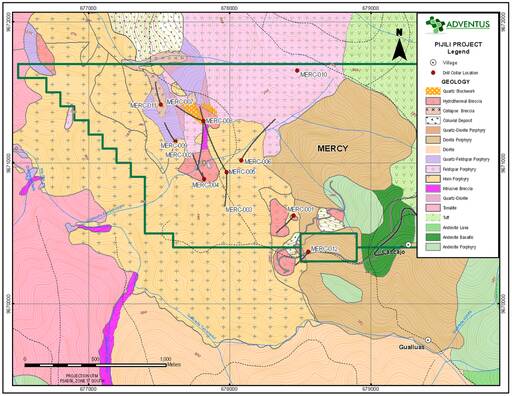 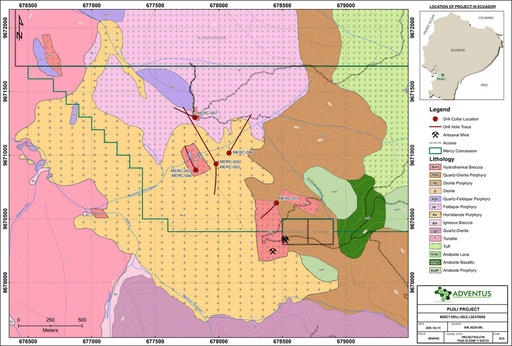 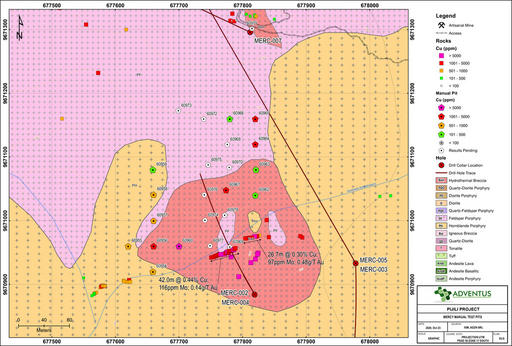 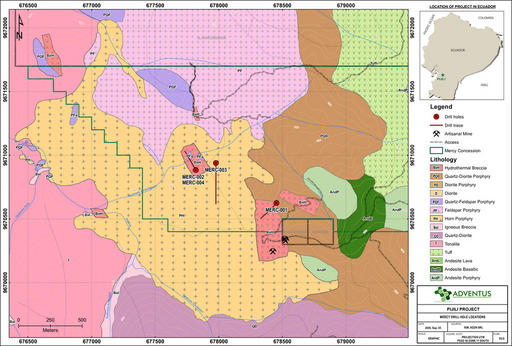 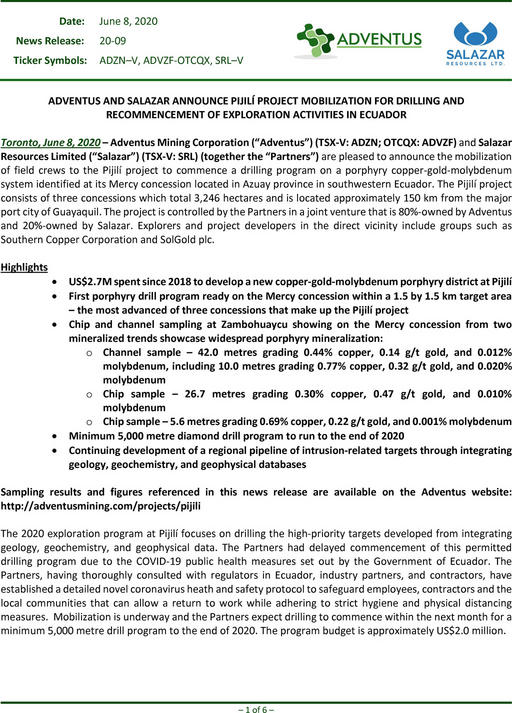 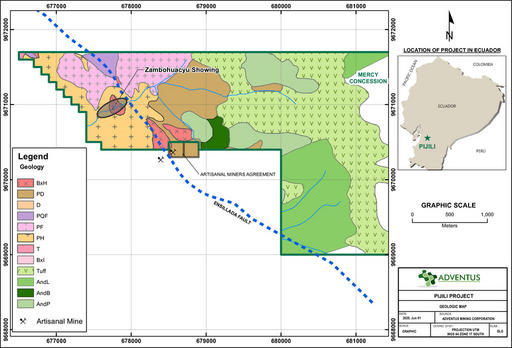 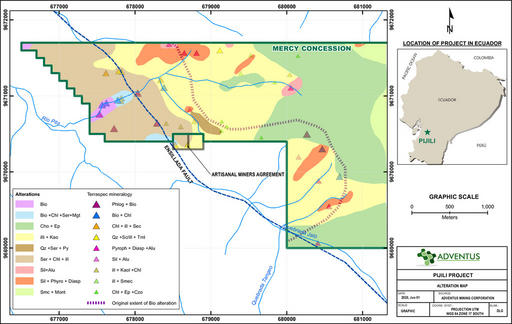 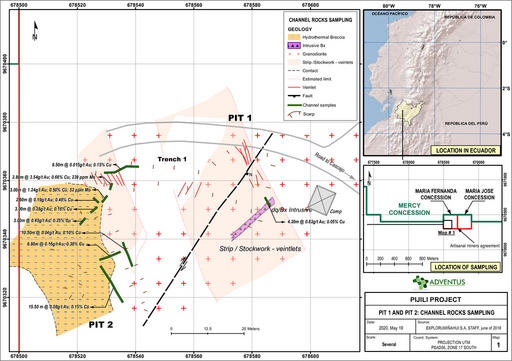 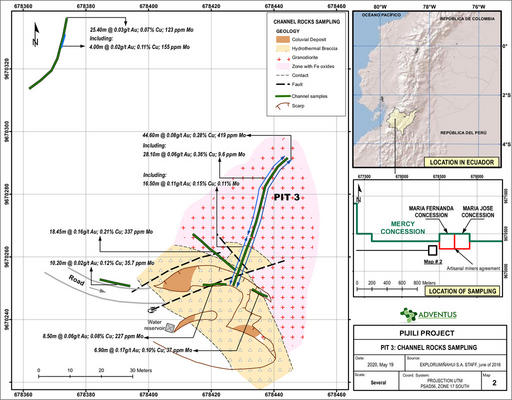 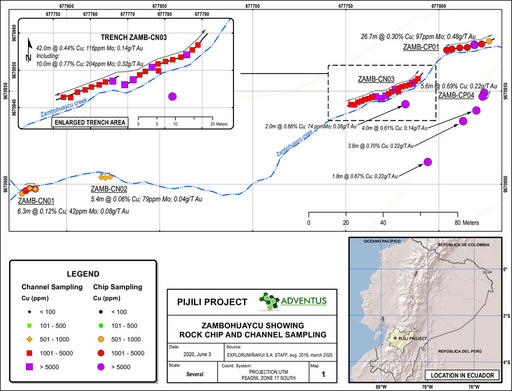 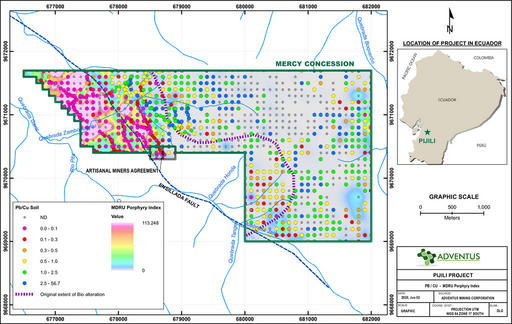 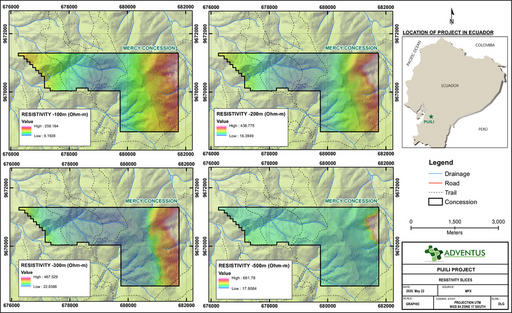 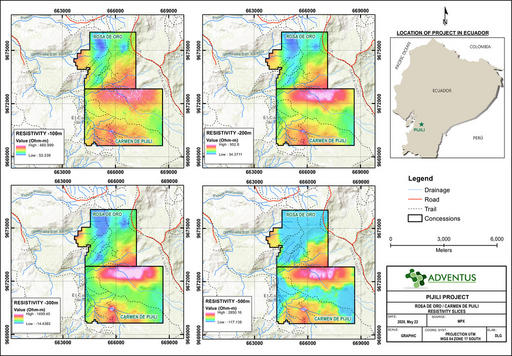 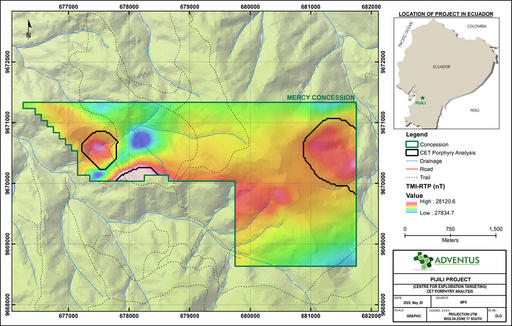 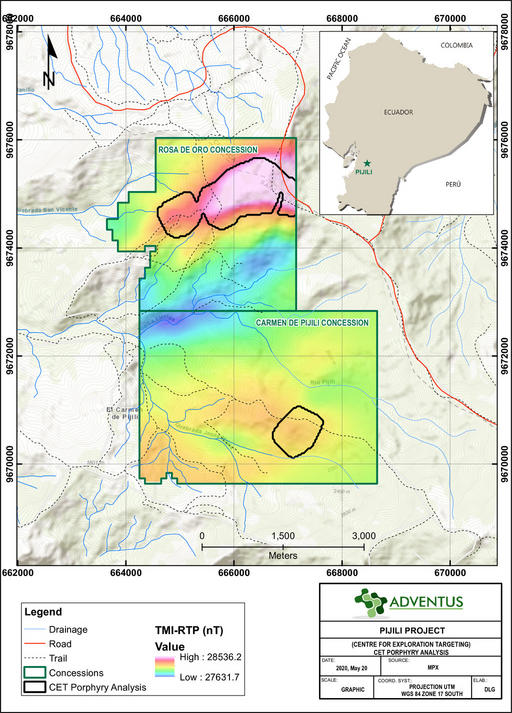 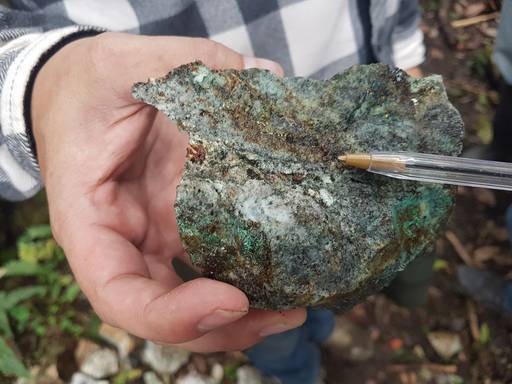 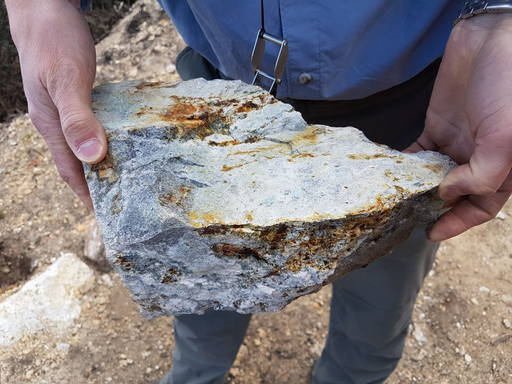 The Pijilí project is located in an established mining area in southwestern Ecuador in the province of Azuay, approximately 150 km from the major port city of Guayaquil. Pijilí consists of three concessions, which total 3,246 hectares, and is controlled in a joint venture that is 80%-owned by Adventus and 20%-owned by Salazar. Adventus believes the Pijilí project contains untested copper-gold-molybdenum porphyry and epithermal gold-silver targets from surface as well as at depth.

Prior to 2018, the Pijilí project had never been explored with modern exploration techniques, such as geophysics, nor has there been any systematic geological mapping, geochemical sampling, trenching and/or drilling undertaken. Small-scale, legally permitted artisanal mining operations adjacent to the property followed precious metal-bearing structures via several small open pits and underground tunnels. These neighbouring concessions have since been acquired and incorporated in the Pijilí project. It is also important to note the presence of secondary copper mineralization that is visible along the walls of the small open pits. Adventus staff have noted copper sulphide-bearing (chalcopyrite) veins in a valley bottom at the confluence of major creeks that also require additional follow-up.

In the 2020-2021 maiden drill program, Adventus completed a total of of 12 drill holes on the Mercy concession (first of three Pijili concessions), all of which hit porphyry-style copper-gold-molybdenum mineralization. Ten of the twelve drill holes intersected greater than 100 metres of porphyry mineralization ranging between 100 to 424 metres. The wide-spaced exploration drilling traced porphyry-style mineralization approximately 2 km from the artisanal mine site at the southern boundary of the concession. Drill intercept highlights include:

On the Rosa de Oro and Carmen de Pijili concessions, the technical staff focused their work on the four high-priority targets
called El Pato, Rosa de Oro, Naranjos and Papagayo discussed in the April 8, 2021 news release (link). As summarized in the exploration update on December 7, 2021 (news release link), over 2,000 samples were collected as part of a program of copper and gold rock and soil geochemistry analyses to support target generation and drill platform spotting. The technical team has concluded that El Pato is ready for final drill targeting as it is the highest-ranking target on these two western concessions for Pijili project. Adventus team members have scouted drill platform locations for the El Pato target while planning and budgeting is being conducted for potential drilling in the first half of 2022.

For additional information on exploration activities from 2018 to 2021, please refer to the Adventus news releases with exploration program updates:

Given the positive results from the drilling program on Pijili's Mercy concession intersecting porphyry mineralization in all twelve drill holes, the Partners are assessing opportunities for a second phase of exploration drilling in 2022 to focus on expanding the areas of higher-grade mineralization. Future drilling would continue developing the geological understanding of the new Ensillada porphyry system discovery. In the interim, fieldwork will continue advancing the manual test pit program to further trace porphyry mineralization to aid with the definition of drilling targets. This work on Mercy concession will run in parallel with the continued exploration on the Pijili project's Rosa de Oro and Carmen de Pijili concessions 8.0 km to the west where targets are being developed for drill-ready status. The technical team has concluded that El Pato is ready for final drill targeting as it is the highest-ranking target on these two western concessions for Pijili project. Adventus team members have scouted drill platform locations for the El Pato target while planning and budgeting is being conducted for potential drilling in the first half of 2022.