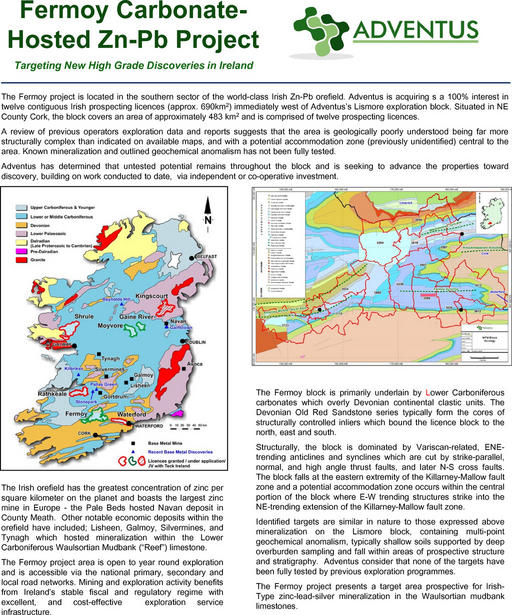 The Fermoy project in north Country Cork consists of twelve (12) prospecting licences covering 477 km2 and is located in the southern sector of the Irish zinc-lead-silver orefield. The Fermoy block is primarily underlain by Lower Carboniferous carbonates which overly Devonian continental clastic units. The Devonian Old Red Sandstone series typically form the cores of structurally controlled inliers which bound the licence block to the north, east and south. Structurally, the block is dominated by Variscan-related, ENE-trending anticlines and synclines which are cut by strike-parallel, normal, and high angle thrust faults, and later N-S cross faults.  The block falls at the eastern extremity of the Killarney-Mallow fault zone and a potential accommodation zone occurs within the central portion of the block where E-W trending structures strike into the NE-trending extension of the Killarney-Mallow fault zone.

Identified targets contain multi-point geochemical anomalism, typically shallow soils supported by deep overburden sampling, and fall within areas of prospective structure and stratigraphy. The Fermoy project area is open to year round exploration and is accessible via the national primary, secondary and local road networks.

Based on historic data and maps, Adventus identified the area as poorly resolved geologically, with some key unrecognized structural characteristics yet to be interpreted by modern exploration models. Adventus considers that none of the targets have been fully tested by previous exploration programs and so presents a target area prospective for Irish-Type zinc-lead-silver mineralization in the Waulsortian mudbank limestones.