TORONTO, May 6, 2021 /CNW/ - Adventus Mining Corporation ("Adventus") (TSXV: ADZN) (OTCQX: ADVZF) is pleased to announce the commencement of exploration drilling on its Kingscourt block in the Moynalty Basin in the Republic of Ireland. The work is being done under the earn-in agreement with a wholly owned subsidiary of South32 Limited ("South32"), which has a right to acquire a 70% interest in the Kingscourt, Rathkeale and Fermoy blocks, which are 100% owned by Adventus through its wholly owned subsidiary, Adventus Zinc Ireland Limited ("AZIL"). These three project areas encompass 1,155 km2 of favourable strata known to host Irish-type zinc-lead-silver systems. South32 is required to fund EUR 3,500,000 in exploration on the three blocks over a four-year period with AZIL acting as operator during the earn-in period (see January 13, 2020 news release).

Kingscourt Block Geology
The Kingscourt block is composed of thirteen prospecting licenses covering 422 km2 of prospective lands for Irish-type zinc-lead-silver systems (Figure 1) hosted in the Lower Carboniferous shallow water carbonate rocks. The project is located 10 km north of the large Navan zinc-lead-silver Mine (also known as the Tara Mine), discovered in 1970 with production having started in 1977. By the end of 2013, the Navan Mine had seen total production amounting to 83.2Mt grading 7.9% zinc and 1.9% lead (1).

The Kingscourt Outlier is understood as an extension to the Dublin Basin, which hosts the Navan deposit, and is known as the Moynalty Basin. It is a northeast trending sub-basin predominantly containing the same favourable Lower Carboniferous platform carbonate rocks referred to as the Pale Beds, overlying a Lower Palaeozoic basement. A wedge of Permo-Triassic rocks forms the final infill of the half graben structure abutting the Kingscourt fault (Figure 2).

The structural regime influencing mineralization at the Navan Mine includes an east-northeast trending and northwest dipping extensional relay fault system, a structural pattern also displayed in the Kingscourt block area (Figure 2). Mineralization at the Navan Mine is thought to be due to the mixing of metal-rich and sulphur-poor hydrothermal fluids leaching metals from the basement with sulphide-rich surface brines developed in small localized basinal areas in half grabens. Continuing tectonic extension is thought to have allowed the development of increased fracture permeability in host environment creating an ideal depositional environment that allowed the formation of Navan Mine. The structure of the region shows some later effects of overprinting by the Variscan Orogeny, particularly with inversion on the principal extensional structures.

Target Generation Initiative
Over the last year, all available exploration datasets were compiled and reprocessed to merge with new data being collected from ongoing surface exploration over the Kingscourt block. Large datasets for surficial geochemistry (including soil and lithogeochemical samples), historical drilling (98 drill holes), historical geophysical studies (gravity, magnetics, electromagnetic, GeoTEM, and Radiometrics), and geological mapping were incorporated with new micropaleontological dating samples collected while verifying existing rock exposures and mapping new outcroppings identified over the last year of work. A detailed ionic leach sampling grid over priority target areas was also incorporated to help interpret the lithogeochemical model to facilitate changes to both the geological and the structural-stratigraphic model.

To visualize the Kingscourt geological and structural framework, detailed cross-sections using historical drill hole information were constructed across the 13 prospecting licenses of the Kingscourt block. These cross-sections were then added to a Leapfrog Geo 3D model that was developed for visualization of all TGI datasets. This model allowed for enhanced target selection in the 3D environment for drill hole planning purposes. A total of seven new targets were determined for the Kingscourt block from the TGI. These new targets were put into a ranking matrix assessing geological and structural frameworks, hydrothermal alteration, lithogeochemistry, soil geochemistry, presence of sulphide mineralization, geophysical responses, and the mineral potential to host an Irish-type zinc-lead-silver system.

Two scout drill holes were budgeted for second quarter 2021 with Marvelstown and Marl Hill (Julianstown) being the top-rated targets (Figure 3). The Marvelstown drill hole is targeting the hanging wall area of the Adree-Moynalty fault and the footwall of the Oristown fault where there is a moderate to strong copper anomaly, noting that copper tends to occur proximal to feeder structures of Irish-type systems like the Navan Mine. At Marl Hill (Julianstown), the drill hole is targeting the hanging wall of both the Julianstown and Ardee-Moynalty faults just north of mapped slump and sedimentary breccia beds looking to intersect the base of the favourable Pale Beds. Along an 8 km strike length of the Ardee-Moynalty fault, only two thirds of historical drill holes completed by previous operators recorded having evaluated the full hanging wall of the fault, and therefore testing the Pale Beds target horizon.

Next Steps
Additional drilling later in 2021 on the Kingscourt block is contingent on results from the two scout drill holes at Marvelstown and Marl Hill (Julianstown), however, five remaining targets are ready for evaluation. In the interim, work continues planning for a scout drill hole on the Rathkeale block on its highest rated target. Finalization of targeting is pending receipt of analytical results from detailed ionic leach soil sample grids that are to be incorporated into the Rathkeale TGI.

Technical Information and Quality Control & Quality Assurance ("QAQC")
Project work in Ireland is being managed and reviewed by Vice President of Exploration for Adventus, Jason Dunning, M.Sc., P.Geo., a Qualified Person within the meaning of NI 43-101, who has also reviewed and approved the technical and scientific information of this news release as accurate. Technical staff collect and process samples that are securely sealed and shipped to ALS Global ("ALS") in Loughrea, Ireland for sample preparation that includes crushing and milling to prepare pulps that are then split for analysis. All assay data have undergone internal validation of QAQC; noting there is an established sampling control program with blind insertion of assay blanks, certified industry standards and sample duplicates for the project.

A QAQC program is also in place at ALS and includes insertion of blanks, standards, and duplicate reanalysis of selected samples. ALS' quality system complies with the requirements for the International Standards ISO 9001:2000 and ISO 17025: 1999. At ALS, elements are analyzed using a 48-element 4 acid digestion with ICP-MS technique with overlimit testing in place using ore grade methodologies, also with 4 acid digestion.

Qualified Person
The technical information of this news release has been reviewed and verified as accurate by Mr. Jason Dunning, M.Sc., P.Geo., Vice President Exploration for Adventus, a non-Independent Qualified Person, as defined by NI 43-101.

About Adventus
Adventus Mining Corporation is an Ecuador focused copper-gold exploration and development company. Its strategic shareholders include Altius Minerals Corporation, Greenstone Resources LP, Wheaton Precious Metals Corp., and the Nobis Group of Ecuador. Adventus is advancing the El Domo copper-gold project through a feasibility study, while exploring the broader Curipamba district. In addition, Adventus is engaged in a country-wide exploration alliance with its partners in Ecuador, which has incorporated the Pijili and Santiago copper-gold porphyry projects to date. Adventus also controls an exploration project portfolio in Ireland with South32 Limited as funding partner as well as an investment portfolio of equities in several exploration companies. Adventus is based in Toronto, Canada, and is listed on the TSX Venture Exchange under the symbol ADZN and trades on the OTCQX under the symbol ADVZF.

About South32
South32 is a globally diversified mining and metals company. Our purpose is to make a difference by developing natural resources, improving people's lives now and for generations to come. We are trusted by our owners and partners to realise the potential of their resources. We produce bauxite, alumina, aluminium, energy and metallurgical coal, manganese, nickel, silver, lead and zinc at our operations in Australia, Southern Africa and South America. With a focus on growing our base metals exposure, we also have two development options in North America and several partnerships with junior explorers around the world. 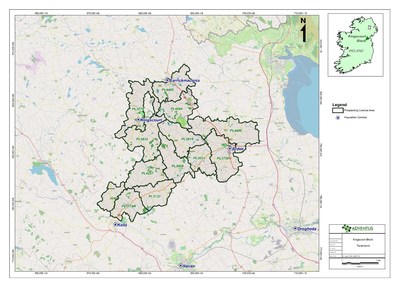 Figure 2: Geological and Structural map of the Kingscourt block 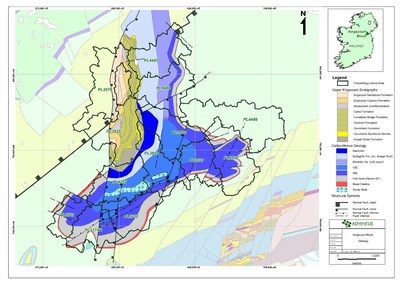 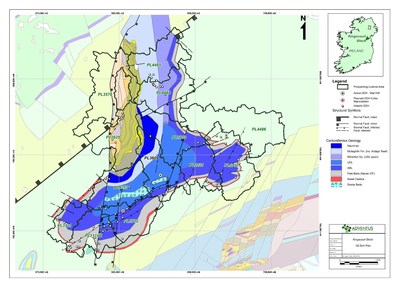 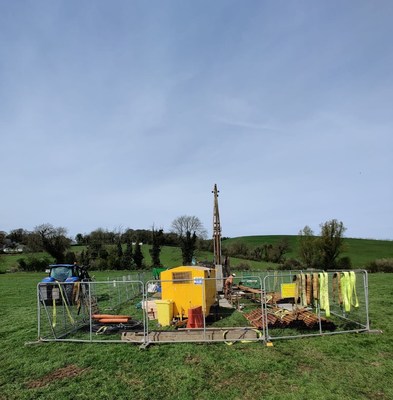